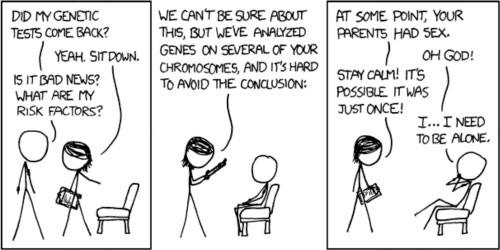 Beginning with the November 2013 session, Useful Genetics will be taught in two 6-week parts.  Signing up for this session will only enroll you in Part 2, so you may want to also sign up for the separate course Useful Genetics Part 1.

Part 1.  Genes and their effects (taught as the separate course Useful Genetics Part 1)

Week 1. How different are we?  Introduction to DNA, genes and chromosomes and the relationships between human populations.

Week 2. How DNA molecules change.  The causes and immediate consequences of mutations.

Week 5.  Personal genomics.  Kinds of DNA typing and genome analysis, and what can be learned from them about health risks, personal attributes and ancestry.

Week 6.  The mechanics of inheritance.  How genes and chromosomes are transmitted through the generations (including the molecular mechanisms of mitosis and meiosis).

Week 7.  Genetic analysis.  Using genetic crosses as a research tool to investigate how genes work and what they do.  Sex-linkage, pedigree analysis, and hypothesis testing.

Week 8. All about breeding and inbreeding.  More about heritability and GWAS. Inbreeding in humans, crops and livestock, and evolution. Hybrids and genetically modified organisms.

This college-level course gives students a thorough understanding of gene function and inheritance, and enables them to apply this understanding to real-world issues, both personal and societal. This is Part 2 of a two-part course.